#WineStudio: Perseverance is the Name of the Game with Ordaz Family Wines 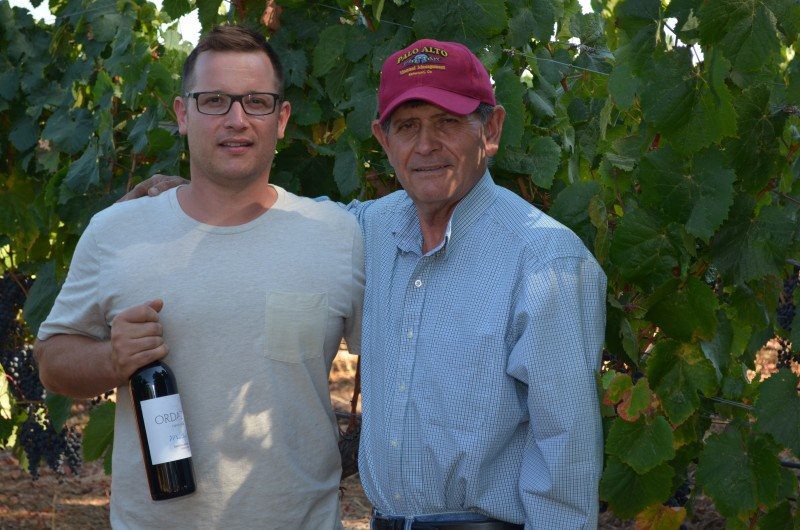 Many of us can relate to being an underdog at some time in our life. In studying for the WSET Diploma, I find myself to be an underdog. I don’t work in the wine and spirits business, so I don't get to talk about wine all day, nor do I have access to the myriad of bottles that someone in the industry has access to. I've had to learn about wine mostly through reading (books, the Internet, blogs, etc). I then supplement book learning with tasting as many wines as I can get my hands on. But those in the biz have a distinct advantage, as they live and breathe wine all day. I, on the other hand, spend my days producing events in the LGBT non-profit world. A far cry from the wine industry!

An underdog in California wine country? Yes, they exist. Not all wineries here are owned by “the big boys”, whether that’s large international firms, Hollywood execs, or retired millionaires. Some earned success in the California wine business by starting from the bottom and working their way up. Chuy Ordaz, an immigrant from Mexico, made 32 unsuccessful attempts to get into the US. Only on his 33rd try was he successful. My family is also a family of immigrants…..aren’t all American families descendants of immigrants? My father and his family came to the US from Argentina when he was a teenager, and on my mother’s side, my grandfather’s family emigrated to the US from Portugal, specifically the Azores.

Fast forward, and after Chuy’s successful 33rd attempt to come to the US, the Ordaz family’s name appears on their Sonoma wine labels. Ordaz Family Wines launched in 2009. All wines are single vineyard. Courage and perseverance have both been pervasive themes with the Ordaz family. Chuy Ordaz’s son, Eppie, is now at the helm of winemaking. He was also the first Ordaz to attend college. Eppie has a Bachelors degree in accounting and went from crunching numbers to crushing grapes! According to Eppie, accounting and winemaking are similar: both require an attention to detail and both require you to put in long hours. To say the least!

Eppie Ordaz was recently named one of several "winemakers to watch" according to Sonoma Magazine. He works alongside his father, Chuy, who is synonymous with some of the more famous vineyards of Sonoma, as he has been managing vineyards for years. Chuy farms 500 acres in Sonoma under Palo Alto Vineyard Management. They are a pioneer in organic farming. Why? To protect the vineyard workers who are on the front lines, as exposure to conventional farming and pesticides could be detrimental to their health. Chuy spent many years in the vineyards himself, and the health of his workers is of utmost importance.

Today Ordaz Family Wines has 50 employees and manages 400 acres. "We're committed to producing single-vineyard wines that are as prized as the vineyards from which they originate", Eppie continues “Everything we do has got to be single vineyard, because I want to showcase the vineyard and the people who work for it.”. Their goal is to make solid wines that aren’t going to break the bank.

Back in February I was able to explore Ordaz Family Wines through a program called #WineStudio.

#WineStudio is an online Twitter-based educational program. Each month a different producer is selected, along with a lineup of wines from their portfolio. Anyone can participate in the weekly Twitter chats, yet only a select few are chosen to receive samples to accompany the conversation. Every Tuesday at 6pm (Pacific time), Tina Morey hosts the group on Twitter at the WineStudio hashtag. Usually accompanying her is someone affiliated with the producer, such as the winemaker, owner, salesperson, etc. Tina describes it as part instruction and part wine tasting. Discussion topics include: the producer history, the grapes, tourism, terroir, regional culture, food, etc. For each new topic Tina has seen dozens of original content pieces created, thousands of interactions via social media and millions of impressions created on our specific topic. Back in February we chatted with Eppie Ordaz and tasted two of their wines.

This wine is elegant (a descriptor I use when a wine is understated), yet it has a presence and an amazing amount of fruit. The wine is pale ruby with red fruit (cherry, plum, cranberry), black pepper, cola, and earthy/forest floor notes. Medium + acid, medium + alcohol, medium body, and medium + flavor intensity. Fun fact: the Sebastopol vineyard (Placida) is named after Eppie’s grandmother.2012 Sandoval Vineyard Malbec $25, 13.5% ABV

This wine is medium ruby with red fruit (plum, raspberry) plus some black fruit (blackberry/bramble), pepper and baking spices (vanilla, cloves, cinnamon). Wow! On the palate, juicy berries plus unending spice and sizzle. Toast and cedar notes showcase the 18 months this wine spent in French oak.

Who doesn’t love a good underdog story? They’re usually much more compelling than the story of someone who got what they wanted and got it easily. There is something so distinctly American about the Ordaz Family Wines story. We are a country of immigrants and we (should) welcome immigrants with open arms. We are a country founded on the idea that you can come here with nothing and make something. Whatever that “something” is.  In this case, it's some damn good wines.