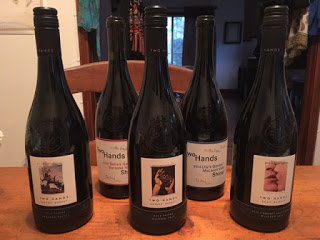 Disclosure: I received these Two Hands Wines samples for review as part of the #WineStudio program.

#WineStudio, the brainchild of Tina Morey, is an online Twitter-based educational program. Each month a different producer is selected, along with a lineup of wines from their portfolio. Anyone can participate in the weekly Twitter chats, yet only a select few are chosen to receive samples to accompany the conversation. Every Tuesday at 6pm (Pacific time), Tina hosts the group on Twitter at the WineStudio hashtag. Usually accompanying her is someone affiliated with the producer. Might be the winemaker, owner, salesperson, etc. Tina describes it as part instruction and part wine tasting. Discussion topics include: the producer history, the grapes, tourism, terroir, regional culture, food, etc. For each new topic Tina has seen dozens of original content pieces created, thousands of interactions via social media and millions of impressions created on our specific topic.

October was the month of Two Hands Wines, hailing from Australia.

Two Hands Wines was the brainchild of Michael Twelftree and a business partner in 1999. Their goal was to share Australian Shiraz with the world, and that they did. At the time, most exported Australian Shiraz was cheap, jammy industrial stuff. Not necessarily terroir-based wines. Two Hands crafted Aussie wines that showcased regionality and varietal differences. It started out as a negociant business, while they spent the time building their winery and acquiring vineyards along the way. Michael since has a new business partner, but is still very much involved. They export over 30% of their wines, and Michael has spent A LOT of time on the road maintaining relationships and creating a personalized experience for those who bring Two Hands into their portfolio, storefront, restaurant, etc. Ben Perkins, the winemaker for Two Hands Wines and has joined us on the weekly #WineStudio chats.

Two Hands describes these as serious wines with irreverent labeling. The Picture Series is the gateway to the Two Hands portfolio. Bottles are approachable and fun with the goal of the juice being: purity of fruit. This is where Two Hands can let go and use different varietals and regions.

Purple fruit, coffee, and mocha. This wine calls for food. It had a more subtle and fruitier nose than the others.

You immediately know there’s a Cab in your glass here. A combination of red and black fruit, green pepper, eucalyptus, herbaceousness, and vanilla. A definite tannic grip. Worked famously with a steak salad.

Round tannins, black fruit, smoke, chocolate, cedar, pepper/spice. Overall, this one was a bit meatier than the others.

The Garden Series is the super premium range of Shiraz from six of the finest Shiraz growing regions in Australia, showcasing the regionality of Australian Shiraz. All the wines here have identical vinification and maturation processes, allowing the regionality (a regions winemaking reputation) to shine through. This is a FINE way to do a side by side tasting, as with consistent winemaking you can really see, smell, and taste the differences in a single varietal from different regions.

A combination of red and black fruit, lots of spice (cloves and pepper), cedar/toasted oak, and vanilla.  Overall, this was my favorite of the Two Hands Wine we tried. It was feminine, round, supple, and sexy.

A combination of red and black fruit with a slight baked quality, pepper, earth, vanilla, and leather. This one was a bit understated. I’d describe it as androgynous...not quite feminine, but not quite masculine. Somewhere in the middle. A lovely wine. Holds it’s own and does not need food.

The Flagship Series is where Two Hands Wines uses the very finest varietal selections from each vintage. And it’s quite a precise system to determine which are the “finest varietal selections”.  Ben Perkins and owner Michael Twelftree meticulously taste each and every barrel. The barrels are blind tasted and each barrel is granted a “grade” from an A+ down to a C. Only A+ barrels are used in the Flagship Series. The Ares wine is the pinnacle of their Shiraz production.  I did not receive this wine for sampling.

What's next for Two Hands Wines?

According to Michael Twelftree, they are working on some new vineyards, increasing clonal selections, and they have a new winery planned for 2018.

Have you tried any of Two Hands Wines before?  If so, leave me a comment below and tell me what you thought of them.

See HERE on Wine-Searcher.com for where you can pick up Two Hands Wines near you.