What's the Plan for Unit 3? 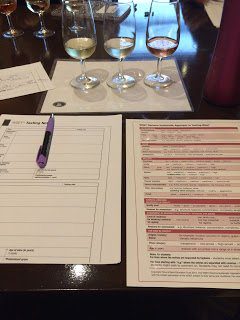 To recap, in July of 2015 I started the WSET Level 4 Diploma, the stepping stone to the Master of Wine program. There are six units in order to receive your Diploma certificate. I passed five of the units in the last year and only have one left! But it’s a big one.

Unit 3 of the WSET Diploma is entitled "Light Wines of the World" and the exam is on June 14, 2017.  This unit covers pretty much all wine except for sparkling and fortified wines and is not for the faint of heart.  We can be tested on still wines from any of the following countries: France, Germany, England, Wales, Switzerland, Austria, Hungary, Romania, Italy, Spain, Portugal, Greece, Cyprus, Bulgaria, South Africa, Algeria, Morocco, Tunisia, Australia, New Zealand, Japan, China, India, Turkey, Lebanon, Israel, the US, Mexico, Canada, Chile, Argentina, Uruguay, and Brazil. I know….it’s like a sick joke.

How does WSET prepare you for this exam? They provide 10 classroom days with a focus on the aforementioned regions. These include: lectures, discussions, guest speakers, and tastings. Our preliminary schedule is laid out below:

The exam is broken up into two sections: tasting and theory. The good thing is that each section is graded separately. You only have to retake the section you fail.

We will be given 12 wines to blind taste. They are divided into four flights of three. We’ll do two of the flights (in an hour), take a short break, and then move to the last two flights (for another hour). For two of the flights we will be asked to identify a common link. That could be: grape variety, region, or production method. There is almost always a flight in which we have wines of a similar style with different quality levels. We need to identify the wines and evaluate quality levels. There is also a mixed bag flight, in which all the wines are unrelated.

For this portion, we will have five questions to be answered in 3 hours. Questions will be a mix of short-form, open-response, and essay questions.

A short-form question typically offers you a choice of six topics to write about. You will be expected to write answers on five of these. For example:

With reference to the wines of the Loire, write about FIVE of the following:

Open-response questions require a fuller response in answer to a specific question, rather than simply stating facts about a given topic. For example:

Explain how grape growing and winemaking determine the style of the following wines:

The essay question requires an even fuller answer and requires you to offer personal commentary on a particular topic. According to WSET: this is an opportunity to not just demonstrate your knowledge of the subject, but also weigh up both sides of an argument and present an informed conclusion. For example:

Discuss the progress that has been made in Sicily in moving from bulk wine production to making quality wines with distinct varietal and geographical character.

The Unit 3 exams are offered in January and June worldwide. The January exams historically have a lower pass rate, as your intense study time coincides with the holidays, which I presume can be challenging. For the June exams over the last 6 years, the worldwide pass rate for the tasting has been 75.7% and the pass rate for the theory has been 45.8%.

How much study time does this all entail? The WSET suggests a total of 300 hours of study time for this unit. Yes, I said 300 hours. Let’s break that down. The first class was Sunday October 23. Starting the following week, that leaves 33 weeks before the exam on Wednesday June 14. Overall, we’re looking at about 10 hours per week of study time. Many Diploma grads I have spoken to suggest studying full-time at least 2 weeks before the exam, with some suggesting a month of full-time studying. As you can imagine, not many people have the luxury of taking that much time off.

As you read above, pass rates for the tasting are higher than for the theory. Yet when you talk to any non-WSET(er), they always get tripped up on how hard it would be to blind taste 12 wines. We do a significant amount of tastings in class, corresponding to the region we’re studying that day. Yesterday, for example in our discussion of Bordeaux and SW France, we tried 9 wines. In addition to the class tastings, about 10 of us are forming a tasting group outside of class. The goal is to meet monthly and taste by varietal. Luckily our instructor works at the wine shop where we take our class. She prepares the wines for us, arranges them in flights of three, and brown bags/numbers all of them. We then split the cost of the wines and do the tastings in timed exam-style conditions.

Theory is a tough one to tackle because we don’t have a textbook per se. We have a study guide that lists all the different things we need to know, but it is up to us to go out and find that information in books or online. I decided to spearhead a theory study group, as the amount of information to learn for this section is unbelievable. We formed a small group of 6, and the group will have two functions.  First, we are going to meet monthly (will be more frequently as we get closer) and split up the subject matter to teach each other in our small group setting. We will each provide a handout for our presentation and bring a wine sample that is representative of the region we discuss. We’ll each take about 15 minutes to present our section and spend about 10 minutes in discussion with the group. The second function is to practice timed writing in exam-style conditions. After speaking to many Diploma grads, they all stressed the importance of doing this. Getting used to spending 30 minutes tackling an exam question, skeleton outlining your answer, and then spending the rest of the time writing is important, and we have be be able to do this for 6 questions over a 3-hour period.  There is no time for brain fog, hand cramps, writers block, etc. The goal is that when we walk into the theory exam, we are prepared and used to writing that much in that short of time.  We will integrate timed writing into our group time starting in early 2017. Also, in approximately May, we want to hold a full mock theory exam.  We will have the questions typed up and spend 3-hours with each other like we will do with our exam on June 14.

That’s all for now. Have you attempted (or passed!) any wine certification programs? If so, tell me about them here!

Wish me luck everyone…..I need it!