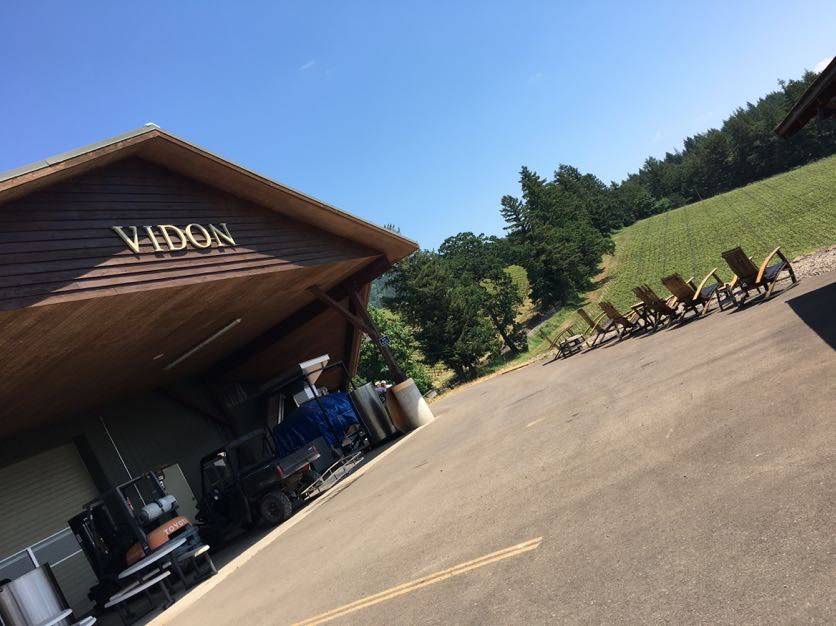 At Vidon Vineyard, there is a perceivable push/pull between science and romance. According to David Bellows, the Vidon winemaker with a PhD in molecular biology, the artistic side is overrated. But I’m going to have to disagree with him. Even here, at a science-filled laboratory/winery, there is some romance. A lot of heart goes into the wine here, and contrary to popular belief, it’s not all science.

Vidon Vineyard gets its name from the combination of the names of the owners: Vi-Don (Vicki and Don Hagge). Vidon is a family-owned estate vineyard (14.5 acres) in the Chehalem Mountains AVA of the Willamette Valley in Oregon. Don and Vicki purchased the property in 1999 when Don was 69 years old and “retired”. In order to prepare the land for vines, he had to clear an ungodly amount of rocks and stumps (over 1,000 of them!). The soils here are varied, with predominantly sedimentary and volcanic elements. A “dog’s breakfast” David called them. “Gemisch” in German. “Mish mosh” in Yiddish. When you are with Don and David, you get a lot of facts thrown at you. It’s the scientist within each of them. David says “We are educators, so we like to educate.” 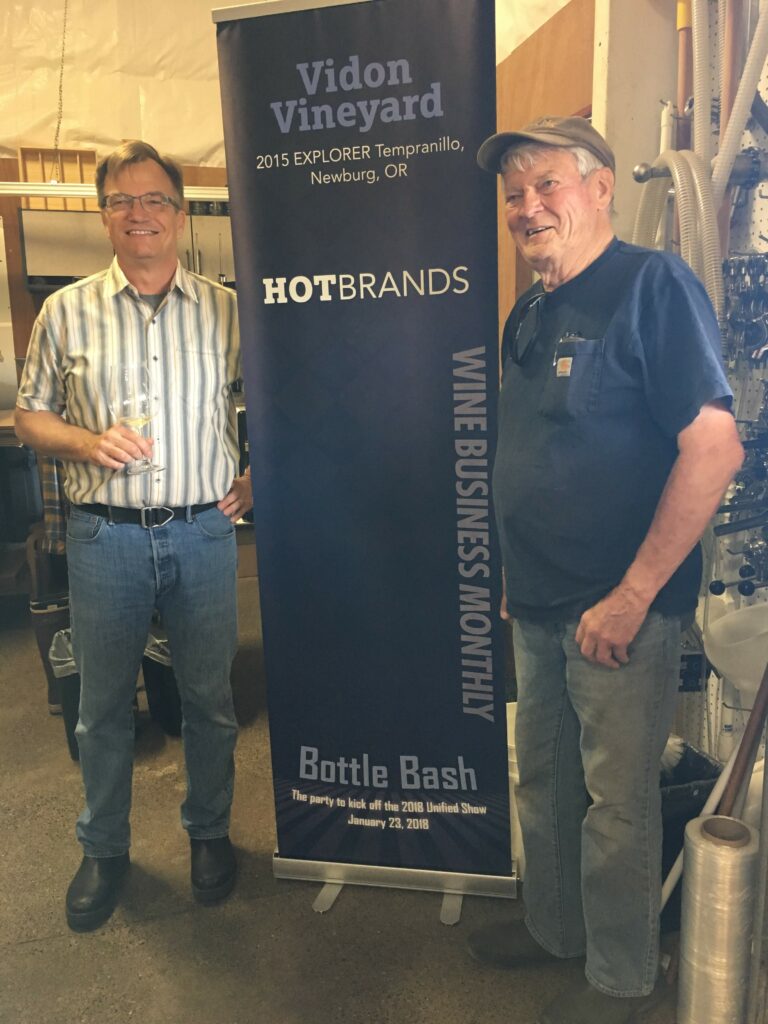 Don holds a PhD in Physics and worked at NASA as the Chief of the Physics branch for the Apollo 7 through the Apollo 13 missions. Which begs the question: Is it more difficult to make wine or to send a man to space? Not sure if there is a straight answer, but we can certainly ponder. In addition to being the owner, Don is also vineyard manager and tractor operator. Retirement has not slowed him down one bit. Sidenote: He also jumped out of airplanes in the Korean War. Is there anything this man has not done?

Both Don and David are constantly tinkering and inventing. During our visit, they showed us a few of their inventions: a glass stopper bottling line, a makeshift wine preservation system, and a wine storage system. They both like to develop new skills and create things from scratch. And their modest winery does function as a sort of laboratory. Decisions are made pragmatically with cost and efficiency in mind. According to Don “Part of what you learn as a scientist is to be systematic. I always try to figure out how to do things better and more efficiently.” Don is even working on creating a new wine club, called VinAlliance that is more like a loyalty club, with multiple wineries participating. No rest for the weary at Vidon Vineyard. 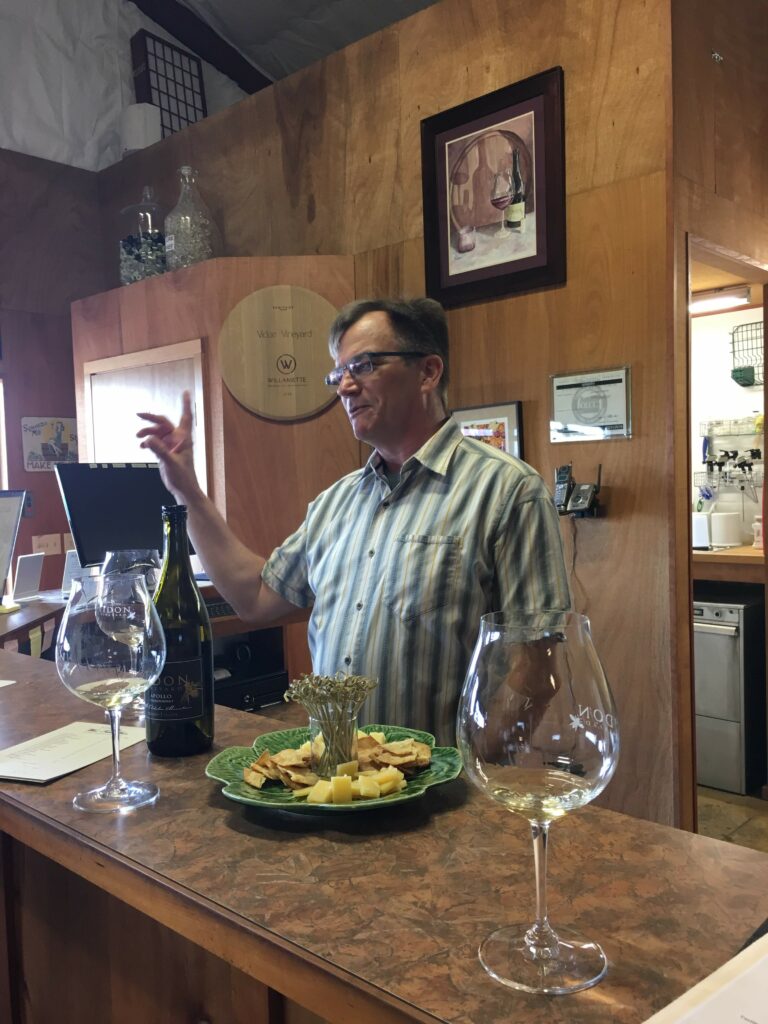 The world according to David Bellows

Their style is minimal intervention winemaking with indigenous yeasts and thoughtful oak use. According to Don “We keep the use of SO2 down, and we don’t use enzymes or additives. And we don’t mess with the wines, but let nature take its course.” With that being said, I had to ask the scientists their thoughts on biodynamics. Their exact words: there’s no singing or naked dancing here!

Vidon produces Pinot Noir (three different clones: 777, 115, and Pommard) and small amounts of Chardonnay, Pinot Gris, Pinot Blanc, Viognier, Syrah, and Tempranillo. They have a 2,100 case production that all takes place in an 800-square-foot facility. All Vidon wines are 100% estate grown.

Fun fact: The Apollo 11 spacecraft carried man to the moon on July 20, 1969, which Don observed from NASA headquarters along with the rest of the team.

They liken this wine to a jazz trio (piano, bass, drums) all playing together. This wine has all BRIGHT red fruit; very primary.

This wine was the most aromatic of the Pinots. The piano of the jazz trio. A surprising palate of complex fresh and juicy fruit with a slightly candied note. Also, fresh rose petals and white pepper. Each of the component Pinots are named after Don’s grandchildren.

This component adds the acidic backbone to the Three Clones Pinot. On its own, I’d describe it as feminine and Burgundian in style. The vines for these grapes are on red Jory volcanic soil. This wine has a perfumed nose with a touch of vanilla.

This component was described as the shoulder of the wine, or the bass line. The whole structure of the Three Clones is sitting on this. I felt more phenolics on this wine than the others, yet it really softened up upon drinking. Beautiful vanilla note both on the nose and palate.

Saturn was the powerful booster that launched the Apollo 11 spacecraft into orbit on its way to the moon in 1969. This wine has a deep purple color with dark red and black fruit both on the nose and palate.

If Don and David don’t feel any romance for the wine, then why don’t we find them in a laboratory? Or plugging away at a desk in a library with their heads in a book? Something drew them to this world. Either the juice in the bottle? The story behind the bottle? Or maybe getting to meet people day in and day out who come visit the tasting room? In the end Don “Just wants to make a good product, charge fair prices, and give folks a nice experience.” So while it may look like these guys are all science, they do have a heart. A logical, scientific heart. And according to Don “You don’t have to be a rocket scientist to make good wine, but it doesn’t hurt if you are.”

As we were wrapping up our visit, we also got to meet Mr. Studley, the rooster who prances around the property like he owns the place. I asked Don if he’d ever get a vineyard dog. “When I get old, I’ll get a vineyard dog”. He’s 86. 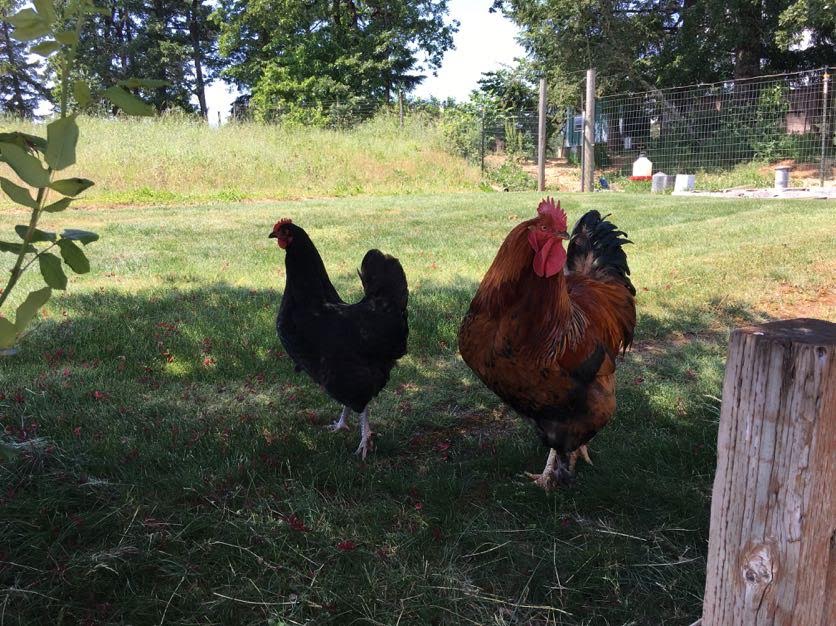 Mr. Studley to the right