Grenache: The Next Great Grape 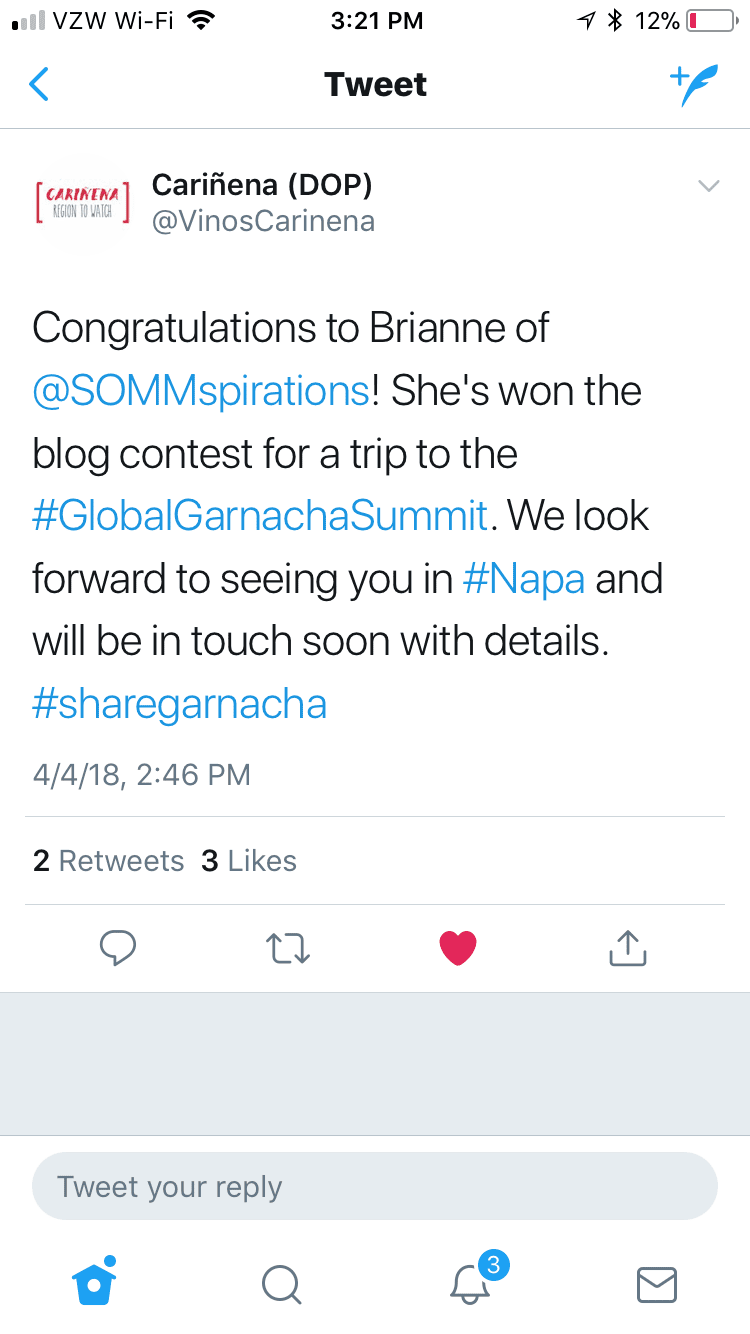 We’re going to Napa y’all! Actually, I already went and will be telling you all about it! Read my contest-winning blog post HERE. 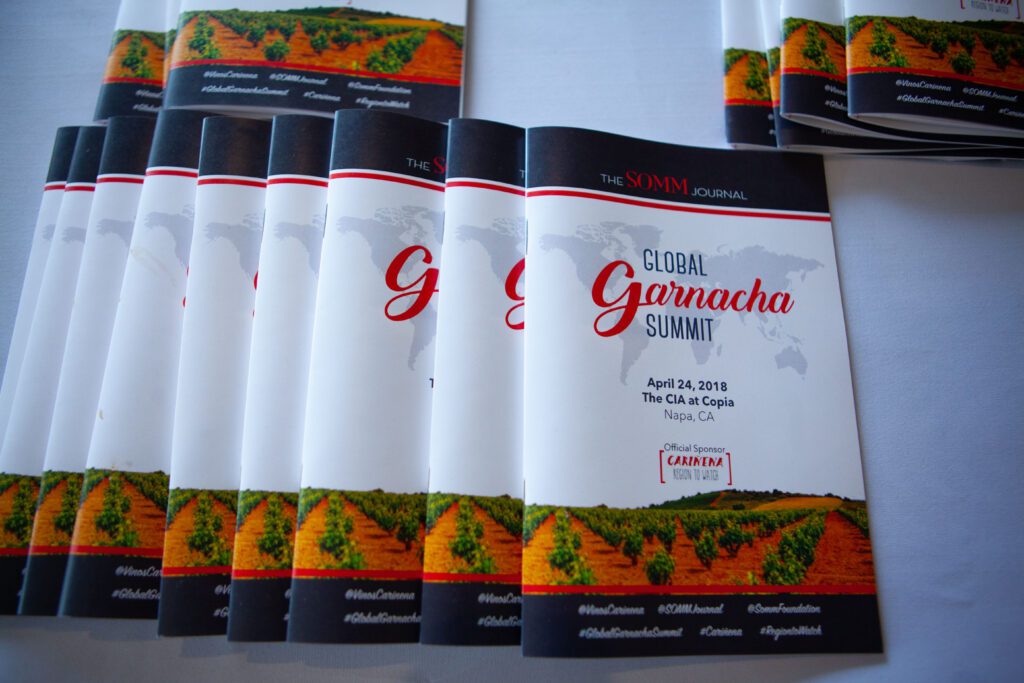 In April I had the pleasure of attending one of the most well-organized and informative wine events. They had a great mix of producers, winemakers, sales reps, retailers, and sommeliers, which is probably what made it so dynamic. I attend a lot of seminars, masterclasses, and walk-around tastings and I am usually left a bit underwhelmed. Rarely am I underwhelmed with the wines, but I’m generally underwhelmed with the quality of speakers/education offered. Let’s be real, as a general rule, most people are not great public speakers. Time and time again I attend these events and either hear a sales rep try to (unsuccessfully) convey the heart and soul of a brand or hear a winemaker speak to a group who clearly spends more time talking to the barrels than to actual people! Or hear someone who is just flipping slides and reading directly from them. I am the first to admit that public speaking is not my strength, but I would think that when a producer, a grape, or a region is being showcased, you want to do just that, showcase them! I digress.

Quick and Dirty Facts about Garnacha

Garnacha is the 10th most planted wine grape variety in the world. Garnacha (specifically the Old World expressions) offer an outstanding value. In Spain, families have owned vineyards and wineries for centuries. With that being said, there’s no mortgage to cover! Overall there are lower land and labor costs. Think about a place like Napa, for example. How much do you think a mortgage costs on one of those giant chateau-like bad boys?

Garnacha is a grape that buds early and ripens late, which means it needs a nice long growing season. The grape has moderate acidity, enjoys hot/dry summers, and most is head/bush trained. Bush training helps control vigor, which is needed with a vigorous grape like Grenache. The bulk of the worlds Garnacha/Grenache can be found in France (51%) and Spain (38%).

Throughout the course of the day I enjoyed two panels. At the morning panel “Garnacha Unveiled” leading producers from Spain, France, and California explored the classical varietal characteristics of Garnacha; how it performs in different regions/terroir around the globe; and how it’s interpreted by renowned producers from around the world. Pedro Ballesteros Torres MW was one of my favorite panelists. Very passionate and unafraid to express his opinions! He said Garnacha is like Cinderella who was always underappreciated and finally got invited to the ball. The ball being the Global Garnacha Summit! Key insights were shared and the diverse panel kept things interesting, and at times, comical! 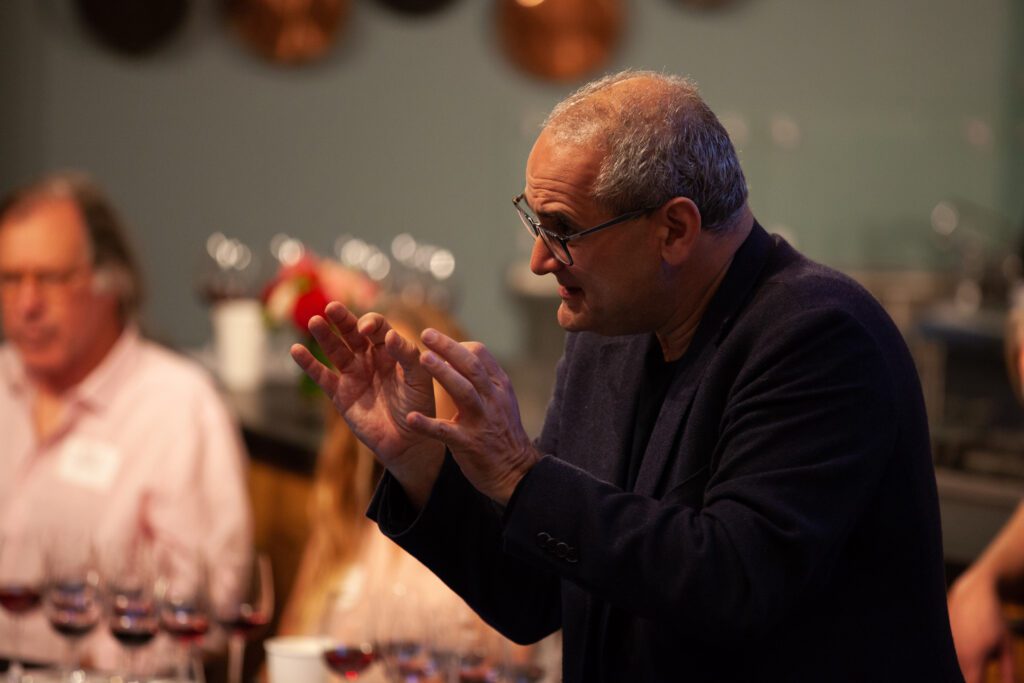 Pedro Ballesteros Torres MW explains the origins and importance of Garnacha in D.O.P. Cariñena, the birthplace of Garnacha with the most old vine plantings in Spain.

Pedro described Garnacha and how its identity is less about the actual grape, and more about where it’s from. To illustrate this, he said this is how both Cabernet Sauvignon and Grenache would introduce themselves at a party:

Randall Grahm of Bonny Doon Vineyard is always amazing to listen to. He started out making Pinot Noir in California, but it broke his heart, so he moved to the Rhone varietals. He thinks cooler climate Grenache could be a thing, so long as the growing season is long enough. 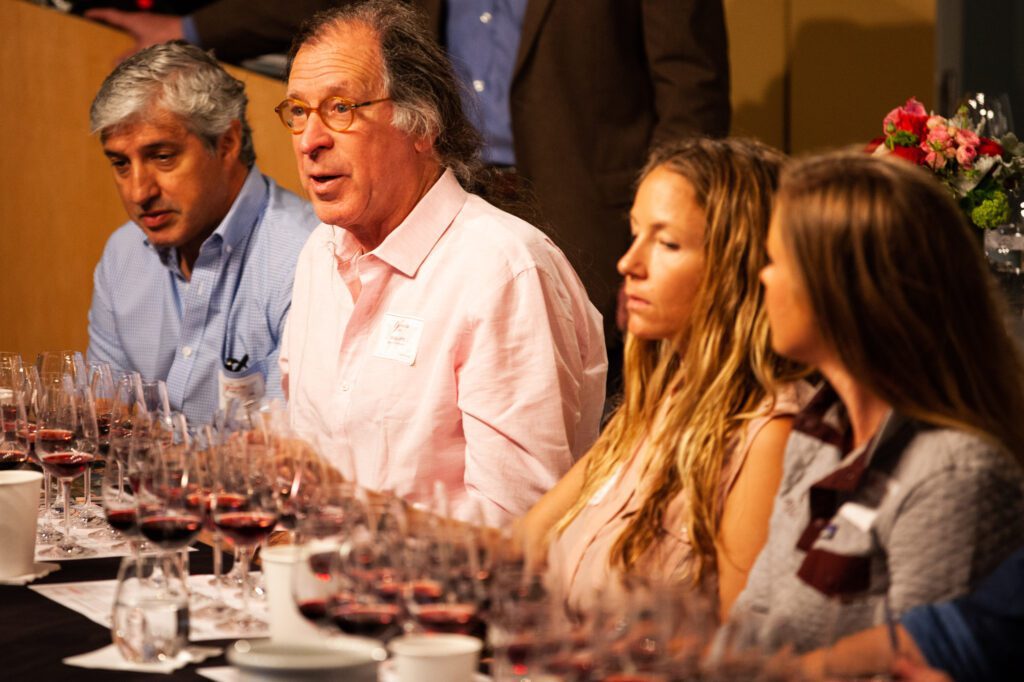 The region most closely associated with Garnacha is DOP Cariñena, located in Spain’s northeast region of Aragón. This is where Garnacha was born. Today most of the old-vine Garnacha in the world is planted in Cariñena. There are over 14,000ha of Garnacha planted in Cariñena alone, with a total of just over 1,500 growers. Cariñena has a high diurnal range, which is the difference in temperature between day and night. This temperature drop at night helps the grapes retain their acidity. Vineyards tend to be high altitude and soils are very complex. Garnacha also plays a strong supporting role in Rioja as a blending grape with Tempranillo.

These are the wines tasted at the Garnacha Unveiled seminar.

Grandes Vinos is a coop founded in 1977 who control ⅓ of the grapes in the region. This is a tank sample. Bright red fruit on the nose (cranberry and plum), plus a fresh floral note (rose petals). Great acid and freshness. Predominantly Grenache, plus 8% Cariñena and 4% Macabeo.

The vine struggle is real. No irrigation and no soil really. Just a sea of slate. On the nose I get red berry, floral (rose), vanilla, and toast. On the palate I get warm, red fruit plus baking spices (including cinnamon). The yield here is ¾ ton per acre; a very concentrated wine. 15.7% ABV.

The family has been growing grapes in this area since the 18th century. Nose = a basement (true story!). Concentrated red fruit plus savory/umami notes. The palate is round and rich. This wine has very good structure and is quite approachable. Funky. I love it.

We’re in the south of France. This wine spent 7 years in barrel and 8 mos in bottle. The nose is understated and pretty. The palate = holy moly. Savory and salty notes. This wine is predominantly Grenache with a bit of Cinsault and Carignan.

As can be expected from Randall, this is an interesting wine. The fruit is from 2-year-old vines, whereas normally fruit is not used for 3-4 years. 150 bottles were produced. This wine was fermented in a garbage can(!). The nose is very layered: red fruit, a perfumed note (rose essence), earth. I could dig into this wine. Randall said it might not make it to retail. ABV is 13.9%. It would have been 14.2% but the coyotes loved it so much, they had to harvest a bit earlier than expected.

I fell in love with this wine. Angela Osborne only makes wine from Grenache and makes it the old way and uses her feet to tread the clusters-every day, twice a day. Grace was the name of Angela’s grandmother. I had only lost my grandmother a month before hearing this panel. And I felt the love for my grandmother that Angela felt for hers. This wine was magical for me. Maybe it’s the rose quartz in the vineyard? As I was writing my tasting notes I even stopped and wrote “no words, just thoughts”. Very, very light in color. The nose is delicate, fruity, and also perfumed. This wine feels empowered. The tannins are very well-integrated on this wine. Some things Angela said about this wine: power, female, aromatic, and earth.

This is their entry-level Rhone blend, the ode to Cotes du Rhone. Warm, ripe red fruit plus floral (rose petals). Chelsea described it as bouncy and convivial.

The family has been farming here since 1844. They are the 6th generation making wine. There is a good amount of earth on the nose, almost a funkiness or twiginess. This wine is 100% Grenache. All vines are 50-120 years old.

The only one of the group with a purple color. This wine smells like freshly poured tar...in a good way! On the palate: savory AF. Dark, baked fruit and licorice on the back palate.

This wine has a clear Old World nose with more earth than fruit. Yet it is a FRESH wine. A great balance of the two.

After all that, you’d think we were done. Well, you’d be wrong! Between seminars there was a walk-around wine and food pairing featuring chefs of Copia who melded the signature flavors of Spain, France, and California with both 100% Garnacha and blends from around the world. The food was delicious and the selection of wines was not overwhelming, which is my #1 criticism of most walk-around tastings.

In the afternoon, I found myself at the “Garnacha Rising” panel that included leading sommeliers, buyers, and distributors who discussed historical strategies for promoting Garnacha wines in addition to current consumption trends. The panelists also exchange ideas for promoting Garnacha in today’s marketplace. This was a fascinating seminar and one that brought lots of audience engagement. The bottom line is that the American consumer is a varietal consumer and how can Grenache navigate that landscape when they are not a household name like say Cabernet Sauvignon, Merlot, or Pinot Noir.

As if our tastebuds weren’t shot, we ended the day with an interactive blind tasting competition led by The SommFoundation with cash prizes of $1000 for first place and $500 for second place provided by Somm Journal. Sadly, I only called 2 out of the 10 wines correctly. But it was a great learning experience and quite humbling, as blind tasting usually is.

All in all a wonderful trip to Napa. Thank you to Gregory + Vine for selecting me as the contest winner and providing me the opportunity to travel to the Global Garnacha Summit. A special shout out to Stefanie Schwalb and Viviana Millan who went the extra mile to make sure that I was taken care of! If this is an annual event, I hope to return next year!