My husband, Aaron, describes me as a pretty even-keeled person. He has trouble discerning whether I’m happy, excited, sad, or angry, because I usually roll happily in the “all is good” zone. But every once in awhile, I get excited. Around the World in 80 Harvests is something I was excited about from the get go. This gal Amanda was traveling “around the world” to participate in “80 harvests” on a global wine and travel adventure. The name of her project an ode to the Jules Verne novel Around the World in 80 Days.

Wherever did I find her?

I am part of a WSET students/alumni group on LinkedIn (nerdy, I know). Someone in the group posted about Amanda’s 80 Harvests project and I was intrigued. I immediately went to her website and read it front to back. It turns out, she was in the middle of a Kickstarter fundraising campaign! I took a look at her Kickstarter page, and watched her short video HERE. From there I was hooked. I had no choice but to back this ambitious and exciting project. I felt inspired to join her journey and she even had a backer level specifically for wine students, which I joined. Amanda offered many generous perks at this level, including access to online content, virtual tastings with winemakers, etc.

This girl kicked ass! She's traveling the world, participating in harvests, and sharing her experience! I had to be a part of this. It helped that her journey coincided with my WSET Diploma study, so I could utilize her fodder as a more "hands on" way to experience the vines, grapes, and harvests in general.

I supported her journey, shared it on social media and crossed my fingers that the project got backed. Alas, it did not. The project fell short financially, but Amanda continued forward.

I was super bummed, but I made sure to add myself to her mailing list so I could follow the project. Fast forward a few months, and I saw her name appear on the Wine Bloggers Conference attendee list! Woo Hoo! I was so excited to get to meet her.

Because I was so jazzed about her project, I decided to reach out to Amanda. I conducted an email interview and had the pleasure to meet her in person at the Wine Bloggers Conference. And I can attest that she is as wonderful in person as she is on the page! 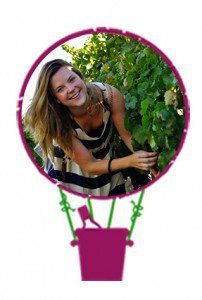 Before Amanda started her Around the World in 80 Harvests project, she lived in England. She grew up in the country and attended the University of London. Post university, she worked in newspapers and journalism, but always had a thirst to explore. Amanda soon developed the itch and became interested in learning about wine in a wine producing country. South America beckoned the loudest. The fact that she spoke a bit of Spanish couldn’t hurt!

To date, Amanda has completed approximately 16 harvests. She has participated in harvests in these countries: Peru, Bolivia, Argentina, Chile, Brazil, United States (Napa, Willamette, and Walla Walla), Canada, and Mexico. Next up on her list is: Niagara (Canada) and the Finger Lakes in NY . Amanda is interested adding one of the lesser known regions in the US to her itinerary. Please share your ideas below, and I will pass them onto her!

According to Amanda, she’s trying to reach “Wine lovers who have an adventurous spirit and want to know more about where and who their wine from around the world comes from.” Though she is intentionally keeping her blogging style and “voice” accessible for everyone. There’s something for new wine drinkers, top somms, industry professionals, etc.

Naturally, Amanda loves drinking wine with others. According to her “It is an emotive and bonding experience. You can speak different languages and yet when you are drinking wine you suddenly find yourself having the same conversation.”

Amanda recounts one of her favorite drinking stories thus far on her journey:

One of my favourite drinking experiences so far though was probably in Peru with Don Jaime, an elderly Peruvian man who had been making mezcal since he was a young boy. He dusted off an old demijohn he’d made years ago, and we took it in turns drinking it from the bottle. It was pure nectar and very boozy! His daughter kept telling him off for drinking too much in his old age and he would cheekily wink at me and take another swig each time she looked away. On reflection, it sounds like I was a bad influence, but I’m pretty sure Don Jaime was the one encouraging me to drink more!

When asked what her life could look like post-80 Harvests, Amanda admits she can’t think that far ahead! She is “up to her eyeballs” in planning her visits to 42 countries around the world. Upon completion of the Around the World in 80 Harvests project, the plan is to turn it into a book.

It sure does sound like Amanda will be busy for quite a while longer!

What do you think of Amanda's ambitious 80 Harvests plan? Any locations you'd love to see her visit? Please leave me a comment below!

I hope you enjoyed this post. If you are looking to Drink Better and Up Your Wine Game, check out my latest virtual wine tasting offerings, including both public and private wine tasting events. For virtual events, my tastings feature a small-format wine tasting set sent to each attendee for a shared tasting experience. What can you expect from a Virtual Vino event? Fun, approachable, interactive, and unpretentious wine education as we share smiles and wine!