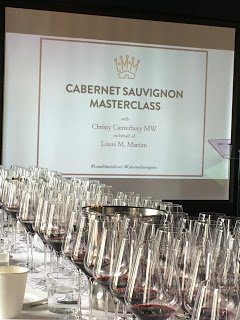 In late Spring I was honored to be invited to a Cabernet Sauvignon Masterclass. The event was hosted by Louis M. Martini Wines and our fearless leader for the day was Christy Canterbury, MW. The backdrop was the lovely Redbird restaurant in the heart of downtown Los Angeles.

Cabernet Sauvignon is a grape we all know a lot about.  It is, perhaps, the most popular and ubiquitous grape on the planet.  Ask any wine-drinking novice about Cab, and they'll have something to say.  Whereas if you ask them about Aglianico del Vulture......crickets.
This was a wonderful Masterclass for me to participate in, as I was preparing for my final WSET Diploma exams.  Cabernet Sauvignon is a grape I can get cocky about.  I know about the actual varietal, I know about how it expresses itself in classical growing regions, and I know what I do and don't like about it. But sometimes it behooves us all to take a step back and go back to the basics.  This is exactly what I did at this event and it proved VERY helpful to my understanding of this grape.  And very helpful as I prepared for my final exams.

Louis M. Martini founded the winery in 1933 (the day after Prohibition was repealed) in St. Helena in the Napa Valley. Martini grew Cabernet Sauvignon and also tended Zinfandel vines planted onsite as early as 1890. He was one of the founders of the Napa Valley Vintners Association in 1943, which sought to promote Napa Valley wines around the globe. Louis M. passed the winemaking torch to his son, Louis P. in 1954. Next in line was Mike Martini who took over in 1977. Louis M. Martini now has many holdings in California and makes wines from Sonoma Valley, Alexander Valley, and Napa Valley.
It was awesome to taste these wines as I rarely get to taste iconic or benchmark wines. I'm not a somm on a restaurant floor with access to these wines and I certainly don't have the budget to buy them on my own. To have the opportunity to taste these wines that I have read/studied about was a real treat. Note that the Louis M. Martini Lot 1 Cabernet Sauvignon was used as the first wine in each flight.  That way we could compare and contrast this wine to other benchmark wines from classic regions.   It allowed me to ground myself in a Napa Cab and then take off wherever we were going: staying in Napa, through the rest of the US, or across the globe.

This is clearly a New World wine because the fruit takes a major lead. No supporting role here. Bold black fruit, which signifies to me a warmer climate. Medium + well-integrated tannins.

This wine has an Old World nose, that included fruit plus earth. More understated, a bit dusty and older feeling, though it was the same vintage as the others. This felt like cooler-climate black fruit, with some red fruit as well. Medium - dusty tannins. This was my favorite wine of the flight for its austerity and restraint. Truly a distinct wine. 49% Merlot, 51% Cab

This wine screams Chile on the nose: capsicum, pyrazines, green bell pepper. As it turns out, I have a very strong nose for the "green" notes, so this stood out for me, though the wine was in no means unripe or subpar. A joint venture between Rothschild and Concha y Toro. I also credit this wine with helping me on my Diploma Unit 3 tasting exam 1 month later. On the exam we had a flight of 3 wines presented to us that were all the same predominant variety. With my tasting flights, I always search for the marker. Which wine in this flight is a sure thing (meaning I know what I am drinking)? If I can find and ID the marker, then I can start deducing what the others could be. The flight is in front of me and I smell all three. One has heavy pyrazines. From there it all came together. One was Napa, one was Bordeaux, and the "green" one was Chile. I incorrectly called the flight predominantly Cabernet Sauvignon, when it was in fact predominantly Merlot, but I still think I acquired enough points in the appearance, nose, and palate to "pass" this flight. Note: I did pass this flight on the exam!  And I give partial credit to having tasted this wine!

I was in my own little hog heaven with this wine. To finally taste a Sassicaia was so awesome! These guys have been credited with starting the Super Tuscan craze. The wine has a much more restrained nose than I thought it would have. There is a beautiful, sweet spice nose and young, juicy red fruit on the palate.

Lujan de Cuyo has a slightly higher elevation than the rest of Mendoza, at about 3300 feet. Red and blue fruit plus smooth, integrated medium tannins. Has a bit of Malbec blended in.

Some green notes here, including pine/dill from the American oak.

This fruit is from an extremely coastal and cool climate. Lots of berry fruit here (both red and black). A medium to medium - finish.

Black fruit (almost sunburned). Medium - aroma intensity. 16.5% ABV on this bad boy, but did not feel that hot.

This was my favorite wine of the flight. Knights Valley is between Napa and Sonoma, yet this wine shows more Napa because it's warmer/riper. Concentrated "mountain" fruit from very low-yielding vines. Juicy red/black fruit (plum and cherry) that is a bit jammy, almost preserve-like. A savory note that Christy says comes from the volcanic soil.

The Cascade Mountains create a desert in Washington, which give burning hot days and freezing nights (translation=wide diurnal range), which makes for very dramatic wines. The nose in this wine was very unusual, so much so that I didn't have any good descriptors! Blueberries on the palate. In my opinion, this wine needs 5-6 years before it's truly ready for drinking.

This was my favorite wine of the flight (actually I had 2). Howell Mountain is the highest AVA in Napa at 1500 feet. Everything is grown over the inversion layer (which is where the temperature begins to increase past a certain altitude). It's a warm AVA that does not have a wide diurnal range. Savory notes almost make me think this is an Old World wine, BUT the fruit is quite prevalent, so it takes me to the New World. Tannins here are mind-blowing. My tannin note was: woah.

This is "valley floor" fruit. Red berries and sweet spice on the nose and palate.

A masculine wine. Serious (grainy) tannins with an herbaceous/eucalyptus note on the back palate. This wine is the "densest" of the flight. A big boy.

Wow. Lovely, mouth-pleasing fruit with drying tannins. A meal in and of itself!

Volcanic soils lend minerality to this wine. A perfect combination of rocks and fruit. One of the best wines I tried today.

Side note: I'm convinced that once you become am MW/MS, you are required to use RIDICULOUS nose/palate descriptors. And I don't mean this as a criticism! It actually cracks me up. My favorite tasting note used at this seminar was "fallen branch".  Not the branch ON the tree, but the branch after if fell! Seriously. Is there a difference? All kidding aside, Christy was right. There definitely was a twigginess to one of the Cab Sauv/Cab Franc blends!
In addition to these incredible wines, lunch was delicious.  A well put together event (from the event planner in me!).