Beneath the Surface at Hertelendy Vineyards 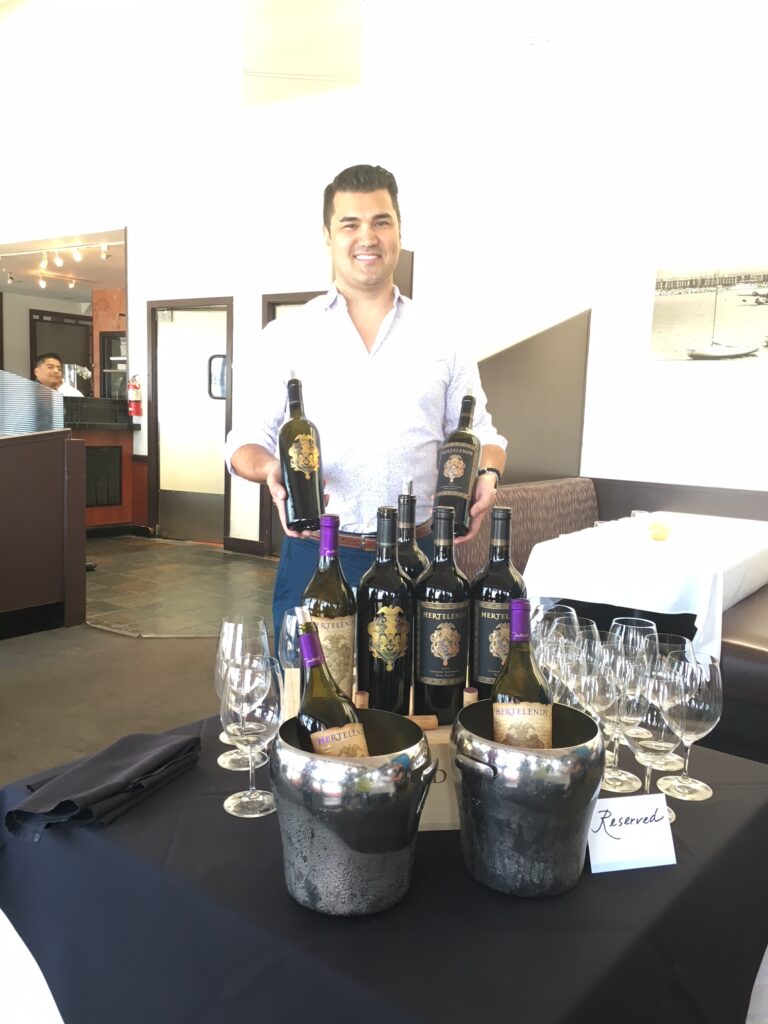 Ralph Hertelendy showcasing his portfolio to the LA Wine Writers

Ralph Hertelendy was our host at the LA Wine Writers luncheon in April at Cafe del Rey in the Marina. Ralph is tall, dark, handsome, and he comes bearing his big, bold, gutsy Napa wines. Ok…...is this one of those “all that glitters isn’t gold” moments? We are talking Napa, you know. And in Napa, sometimes the shiny exterior (i.e. the chateau on the hill or the #boldAF bottle of wine) is not all it’s cracked up to be. Is there more than meets the eye at Hertelendy?

Ralph’s family had been making wine in Hungary and Slovenia over 300 years ago. His Great Uncle Gábor Hertelendy created two varietals in his volcanic basalt-mountain vineyards overlooking Lake Balaton: Szürkebarát (better known as Pinot Gris) and Kéknyelű (a rare Hungarian white wine grape only found in the Badacsony wine region). His vineyards were confiscated by the Communists, but they allowed him to stay and work on his former land as a hired hand. 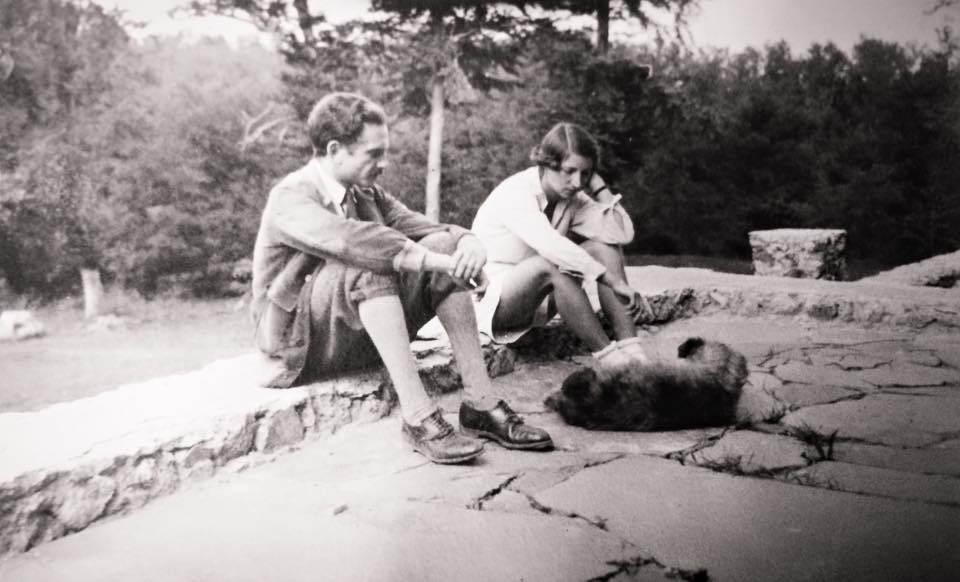 Ralph comes from a diverse family. His mother was born in China, raised in Peru, and met Ralph’s father at UC Berkeley. His father was a classical music critic, and Ralph grew up exposed to music and the arts. He is a classically trained pianist and can pick up just about any instrument and play it. In addition to making wine, he also makes electronic music. His fermentation journey began at age 15 when he made shitty (his own words) beer in his basement. At 25 he made his first wine (a Bordeaux blend) from purchased grapes.

Hertelendy’s first vintage was 2013; a new kid on the block in the Napa world. A Howell Mountain winery owner once told Ralph, “I’ll sell you my grapes, even though you’re a nobody.” It’s statements (and people) like that, that give Napa a bad name. That perpetuates the elitist mentality so often associated with the area. Hertelendy now owns the 4-acre Rockwell Ridge estate vineyard, which is 35 feet below the prestigious Howell Mountain AVA demarcation line, so they are unable to use that in their labeling. In addition to their small estate vineyard, they also source fruit from all over Napa. 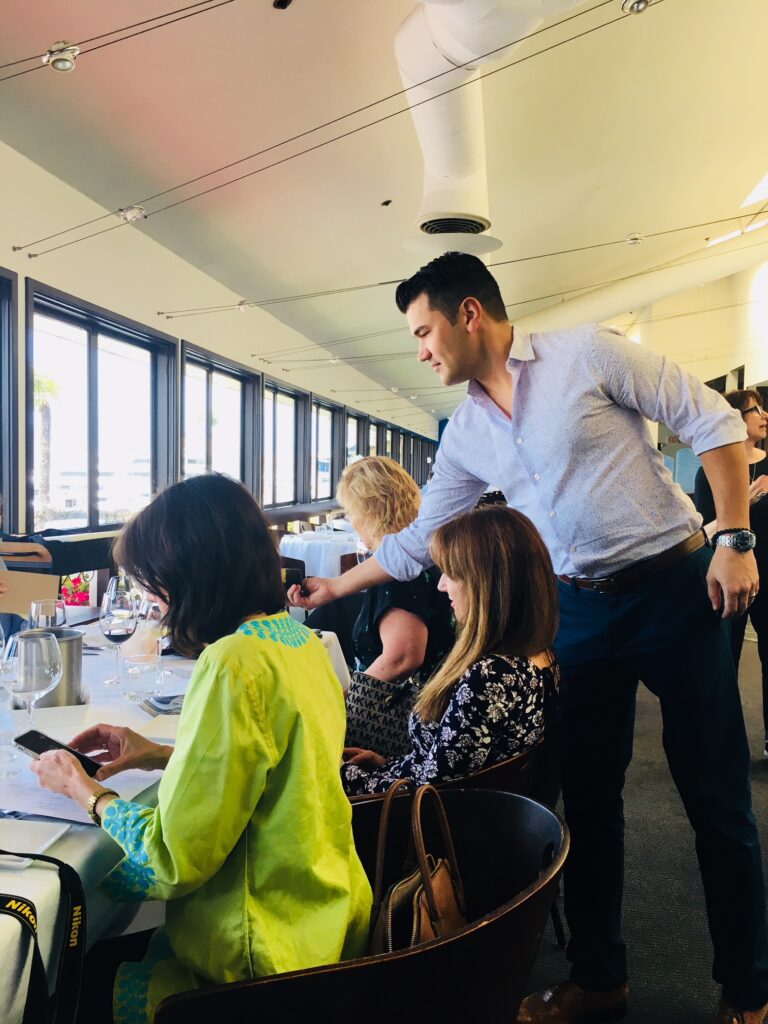 Ralph’s motto is to not play by the rules. His wines showcase “bold elegance”. They do not have a private tasting room, but their wines can be tasted at the Vintner’s Collective in downtown Napa. In addition to their Chardonnay, Cabernet Sauvignon, and other Bordeaux blends, they are launching a Cabernet Franc later this year. Next up: a sparkling wine, Pinot Noir, and a GSM blend. His end game? Scotch.

During the 2017 vintage, 25% of their grapes were picked by Saturday October 7th. The 75% balance was slated to be harvested Monday October 9th. On the evening of Sunday October 8th the devastating Napa wildfires began. Hertelendy was not in a good position with most of their fruit still in the ground. The vineyards did not burn, but lab analysis does show smoke taint in the fruit. At the time of this luncheon (April 2018), the jury was still out as to the plans for this fruit. They might use a filtration method known as reverse osmosis which can remove smoke-derived compounds; although there is a chance this may only be temporary and the compounds return as the wine ages. They might use the fruit for Audēre, their sister label, or they might make a special edition “smoke” wine. Gimmicky, yes. But it could be an interesting experiment.

And now, back to the luncheon!

This salad was to die for. For the wine, grapes were sourced from the legendary Ritchie Vineyard that is said to be one of the best Chardonnay sites in the country. The wine spends 15 months in barrel (90% new French oak). It is unfined and unfiltered. I find it so incredibly complex and layered with notes of sweet citrus (meyer lemon), spice, tropical fruit (guava, ripe pineapple), toast, and sweet spice. Ralph describes it as a Cab lovers Chardonnay. Fun fact: the label changes color when the bottle reaches the optimal temperature of 48 degrees. 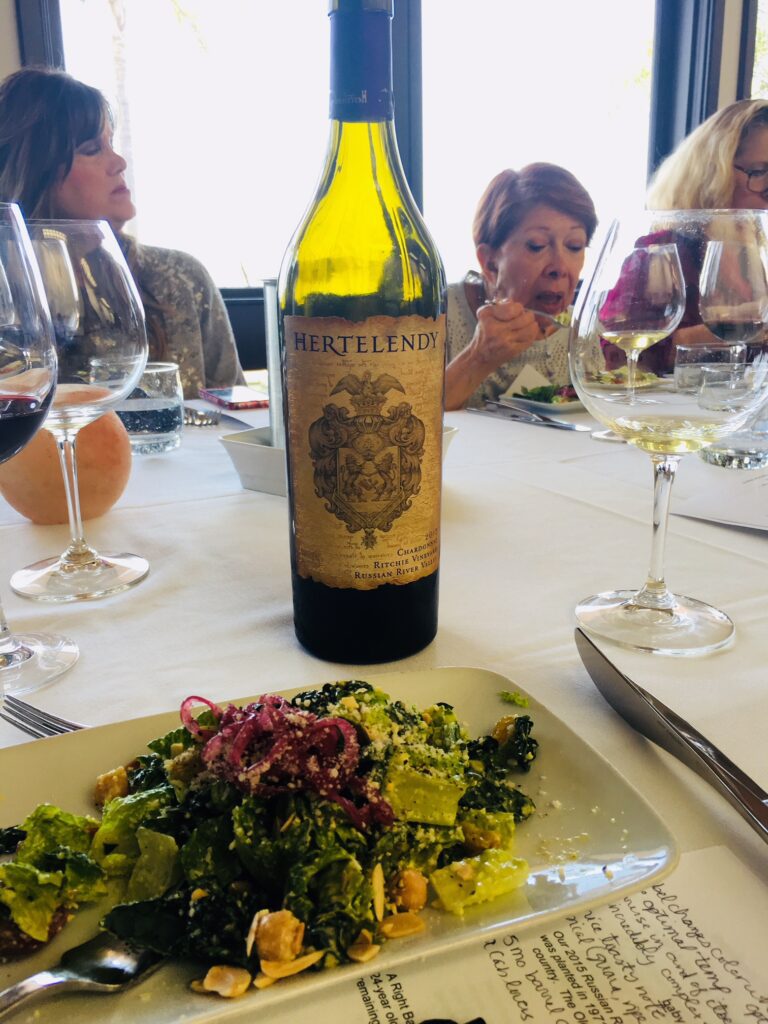 Jesus Christ this pasta is good. This wine is the Hertelendy cuvée. It’s an approachable Napa Cab and a good entry level into the region (yes, $135 in Napa can be considered “entry level”). This is their “Right Bank” approach with Merlot making up 81% of the blend. This wine shows great red fruit, black pepper/spice, cedar box/cigar, and floral (violet) notes. 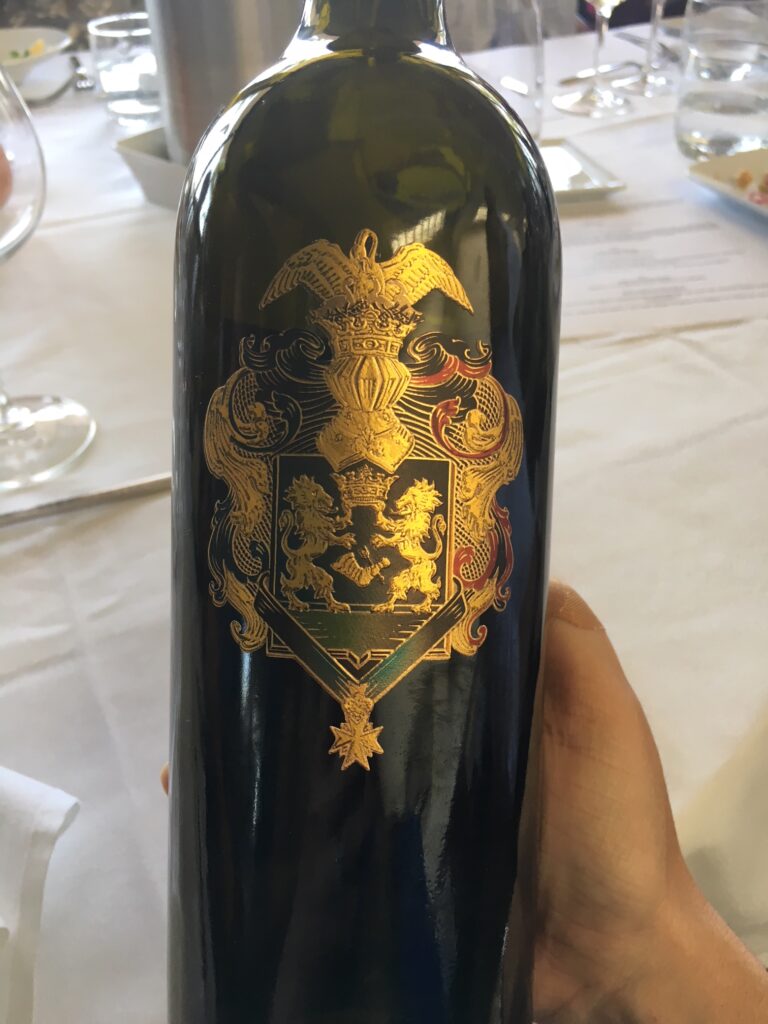 Yowzas! This wine is a delight; very well-balanced and mellows out A TON with food. I get notes of: black fruit (blackberry, cassis), bramble, black licorice, baking spices (vanilla, clove), truffle and forest floor. The fruit used is a combination of Mayacama valley floor fruit plus Vaca mountain fruit. The latter two tasting notes (truffle and forest floor) come from the Valley floor fruit). 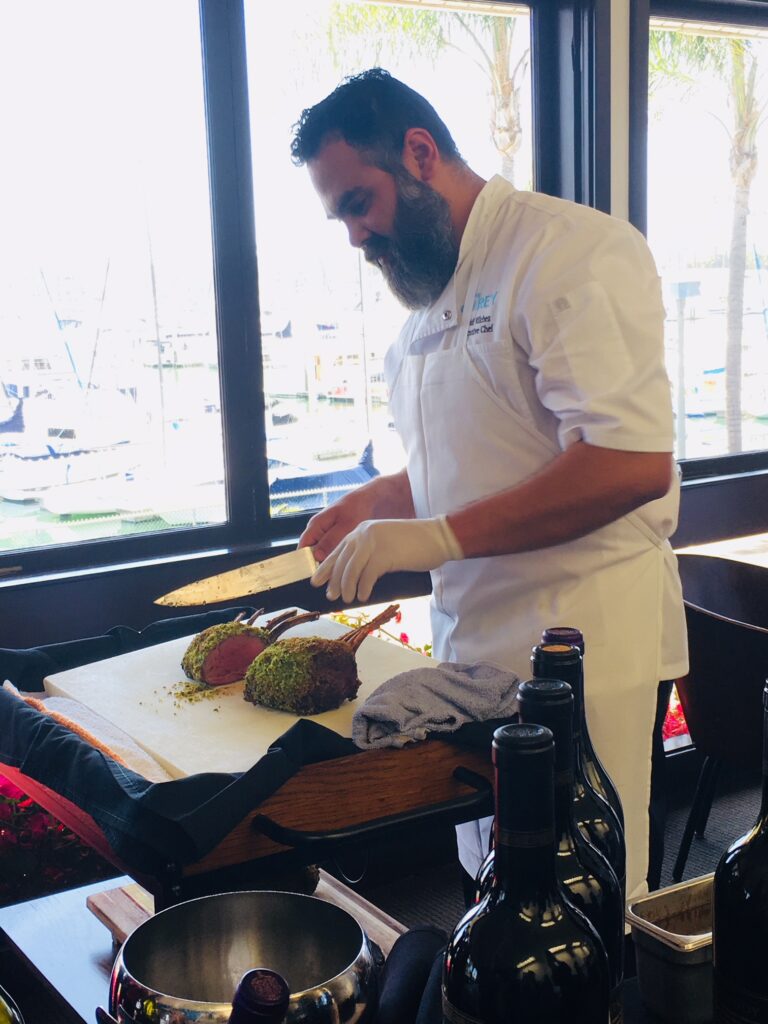 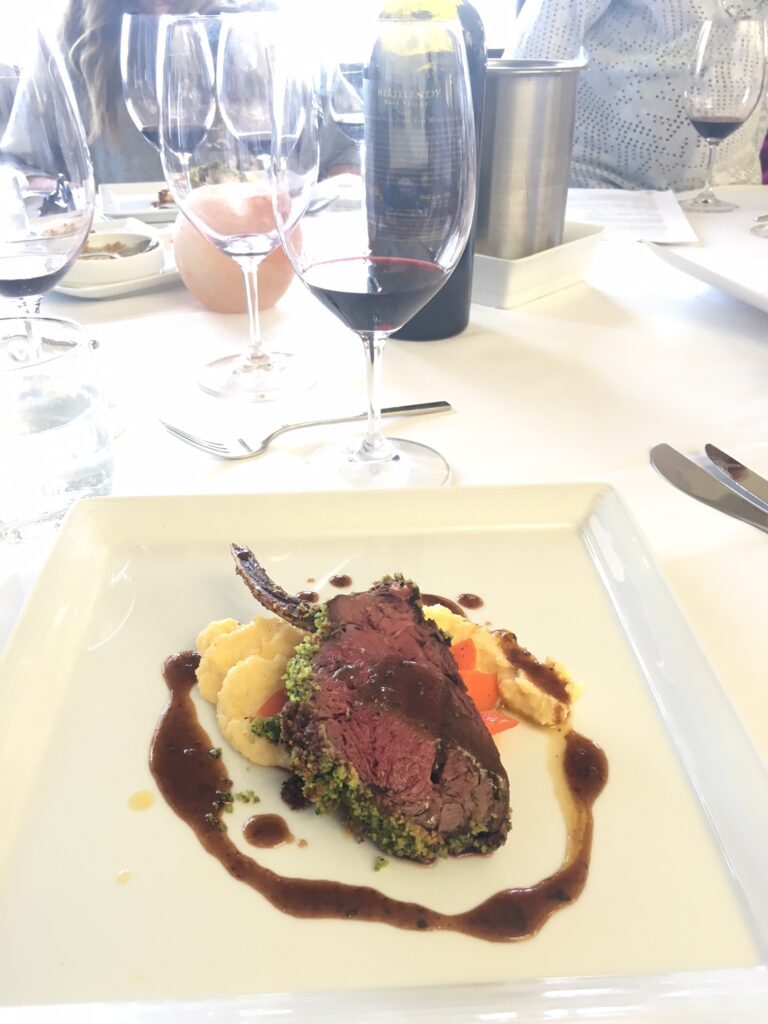 This was Ralph’s first Hertelendy vintage. All the fruit was sourced. The wine is predominantly Cabernet Sauvignon with 12% Petit Verdot and 5% Merlot blended in for good measure. One reviewer said the oak was “beautifully disguised”. Parker gave it a 95. I get beautiful, ripe black fruit and bramble. 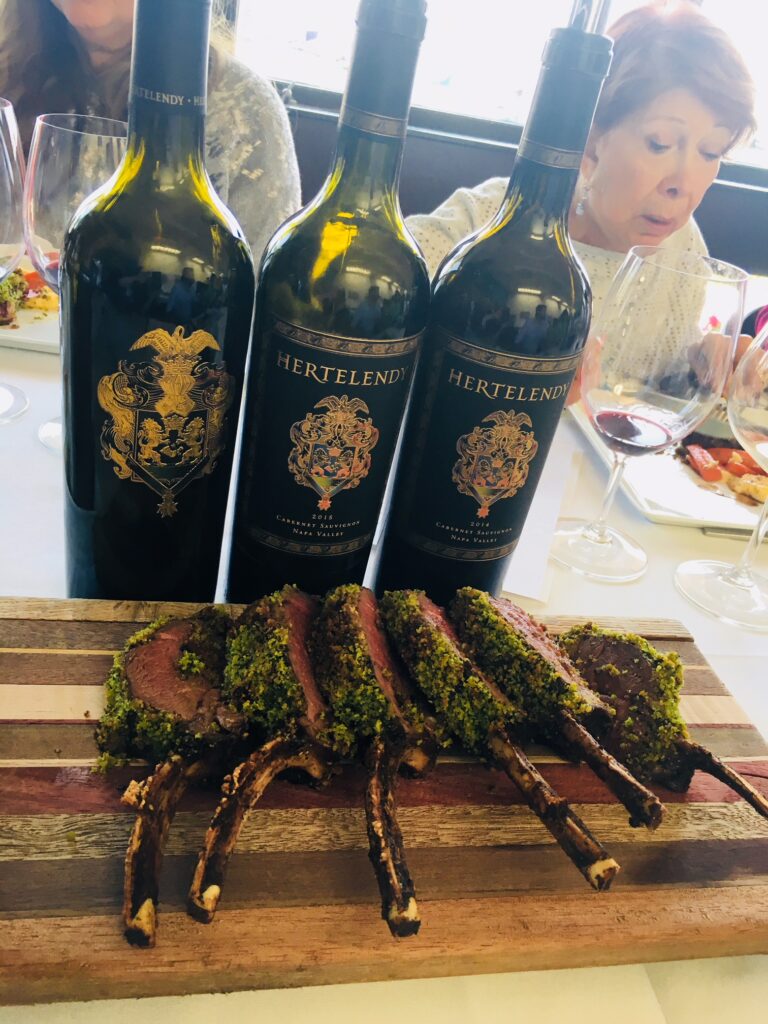 The group found Ralph to be knowledgeable, personable, and an all-around great guy. He is a Jack of all Trades who seems to be successful at everything he touches! So yes, there is more than meets the eye at Hertelendy Vineyards. There is heart, soul, and a family legacy driving the operation. And the wines.....they kick ass. Definitely worth a taste if you come across them. They can be found at the restaurants listed HERE. Cheers!