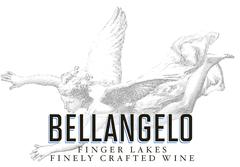 *Wine samples and the A Sense of Place book were received for review from Bellangelo Winery.

I’ve been struggling with a bit of post Wine Bloggers Conference blues as of late. Lodi is still on my mind, but how could I forget the Finger Lakes conference in 2015? My first foray into the WBC world. It was a whirlwind of a trip (see HERE), but it was a magical time when I had just started my blog and was starting to figure out what the heck I was doing in the world of wine. I was exploring with different writing styles, figuring out how to throw social media in the mix, and navigating the wonderful world of requesting samples. The samples received from Bellangelo Winery were the first press samples I ever received! I came back from WBC15 and reached out to a few producers who caught my eye in the Finger Lakes. Bellangelo was one of them. They sent me their book A Sense of Place by Christopher Missick and 2 bottles of wine, which I will discuss below.

History of the Finger Lakes

Back in the day, in the Devonian Age to be exact (approx 400 million years ago), New York was covered in warm seawater. There was lots of marine life in those waters, and the marine life lived and died with their remains deposited on the seafloor. These remains contributed to the limestone deposits that are still there today. The sedimentary rock found in the Finger Lakes was formed by erosion from the Appalachian Mountains. Eleven long, narrow lakes make up the Finger Lakes. These lakes originated as ancient rivers and river valleys. Two million years ago we were in the Ice Age. Glaciation began, which is the advancement of massive continental glaciers. The Laurentide ice sheet both advanced southward and retreated northward carving rivers/river valleys and depositing glacial debris. Those rivers were the precursors to the Finger Lakes. 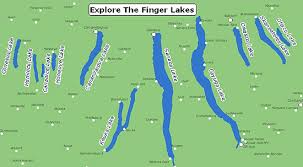 History of Grapes in the Finger Lakes

Fast forward to the early 1800s and Reverend William Warner Bostwick planted native North American vines (NOT vitis vinifera) to make sacramental wine. He distributed vine cuttings to his parishioners to do the same. There were native grape vines planted before Reverend Bostick came along, but he was determined to proliferate the vines. Dr. Konstantin Frank was the predominant champion of vitis vinifera vines in the Finger Lakes. In fact, in one decade alone he grafted more than 250,000 European vinifera vines onto American rootstock. This ensured that vinifera grapes (i.e. Chardonnay, Pinot Noir, and Riesling) could be grown in the Finger Lakes. Using the native rootstocks allowed for successful grape growing despite winter frost, pests (i.e. phylloxera), and disease (i.e. mildews and black rot). 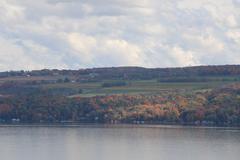 Villa Bellangelo winery, overlooking Seneca Lake, was founded in 2002 by Michael Litterio and in 2011 was acquired by the Missick family. Bellangelo only works with growers who do not produce their own commercial wines and growers who allow their cellar team to work with them during growing season. All grapes must be sourced from the Seneca Lake Finger Lakes AVA. 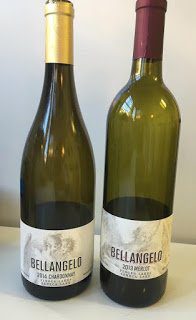 This wine is a clear, pale lemon color with a clean medium intensity on the nose. Aroma notes of: lemon and green apple with no MLF (as confirmed on the back of the bottle). On the palate I got flavor characteristics of lemon, green apple, stone fruit (peach). Overall this wine is balanced and has a nice length. Bright flavors (because of no MLF plus the use of stainless steel and neutral oak). A nice deviation from the whites I normally choose.

This wine is a clear, pale ruby color with a clean and medium (-) intensity on the nose. Flavor characteristics include: blackberries, a little tart cranberry, red cherry, black pepper, slight spice (clove?), and toast. This is not what I expected. The wine has nice fruit and an almost tobacco/leather character. A nice easy red to start the night if you don’t want to start with a white. Very balanced with nice juicy fruit.

Bellangelo wines can be purchased from their website HERE to ship to CA and NY only.

The Bellangelo book A Sense of Place by Christopher Missick can be picked up on on their website HERE for $6.99.  It can also be found on Amazon.

Have you ever tried Bellangelo Wines?  If so, leave me a comment below and let me know what you think!